Advertisements
The dental implant is a prosthetic root inserted axially into the alveolar bone, it is stabilized by screwing it into the bone. its morphology and surface will allow its osseointegration. A dental implant is made of different components.

All implant systems are conventionally made up of two parts:
– an endosseous part, called an implant
– a part emerging in the oral cavity, called the abutment, it is connected to the implant
by mechanical systems.

2-1 The different parts of the implant

Prior to “modern” implantology, different forms of implants existed such as blades, cylinders, discs, or screws. From now on it is the screw-shaped, axial implants that have been imposed with many morphological variations or surface designs that present many advantages and disadvantages, giving large varities to choose from depending on the case.
The implant can be divided into three parts; the neck, the body and the apex:
The implant’s body: The body is the most extensive part of the implant located between the neck and the apex.
It is generally cylindrical or conical in shape. The body includes the turns which will ensure the primary implant stability and play a role in the dispersal of forces.
The geometry of the implant is variable in shape (symmetrical or asymmetrical), size (bigger than the diameter of the implant body), the angulation and the pitch of the screw.
The Implant’s neck: The neck is the part of the implant that connects with the abutment. it is either
positioned at the level of the bone crest “bone level”, or at the gingival level (“tissue level”). The neck can be straight or flared, narrow or wide.
The implant’s Apex: The apex extends and terminates the body of the implant. This part can be active
(self-tapping implant) or passive, flat or rounded, may or may not have turns, be perforated,
be compressive or contain a “reservoir”.

Cylindrical implants: This shape allows significant leeway during the drilling and positioning of the implant without compromising the primary stability. Indeed, it is possible to modulate the  depression of the implant without modifying the depth of the cubicle. This type of implant is indicated for healed sites of normal or dense bone quality.
Conical implants: This shape has several advantages. On one hand its conical shape fits most easily in a concave ridge or between two converging roots.
On the other hand, its apical taper increases the primary stability by compression of the bone without cortical compression. However, the error tolerance during its placement is less compared to the cylindrical implant.
Self-drilling conical implants: This form induces double bone condensation in the horizontal and vertical direction. In the horizontal direction thanks to its progressive diameter and vertical thanks to to the varying thickness of the turns. Therefore this type of implant  has a high insertion torque, which means a high primary stability, even in low density bone. It also offers the possibility of changing the insertion axis during installation. This versatile implant is thus indicated in all sites, post-extraction or healed, of the maxilla or the mandible. 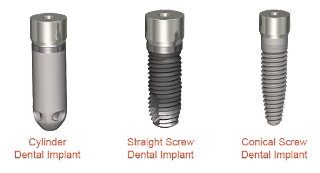 Dental implants are mostly made from metallic biomaterials.
The most famous metals for their biocompatibility are:
– Commercially pure titanium (Ti cp, grade 1 to 4)
– Titanium alloys (Ti grade 5, TiZr)
– Tantalum (Ta)
– Zirconium (Zr) (not to be confused with zirconia which is ceramic, that is to say
ZrO2 oxide, made from metallic zirconium)
The high corrosion resistance of these metals in contact with physiological fluids,gies them an excellent biocompatibility.
Research is currently focused on different materials (ceramics, tantalum, titanium alloys and zirconium…) likely to improve the biological or mechanical qualities of these biomaterials.

The implant connection or connector is a fitting between a male part and a female part connecting the abutment and the implant:
• When the female form is located at the level of the prosthetic abutment, the connection is called
external.
• When the female form is located at the level of the implant, the connection is said to be internal.
Connections fall into two main families: passive and active. Within each family, we again distinguish the external connections from the internal connections according to the location, on the implant or on the abutment, of the male and female parts.
Passive connections: they consist of a geometric device (hexagon, octagon, crenels, cams, etc.) and a screw. The assembly and maintenance of components are ensured by the screw only. No force is developed at the interface of the male and female parts.
Their use in the clinic is simple because of the positioning and orientation of the abutments, this results in  precise and reproducible results in the clinic and the laboratory. However, the screw is the
more often the weak link in the whole.
Active connections: this is an interference mechanism based on the principle of the Morse taper, That is, the force-fitting of a male cone into a female cone. The union of the two They oppose a locking movement and protect the abutment screw against harmful loosening and bending. However, their use in the clinic is more difficult because if the relative rotation of the cones offers an infinity of positions, the repositioning between the laboratory and clinic is complicated. 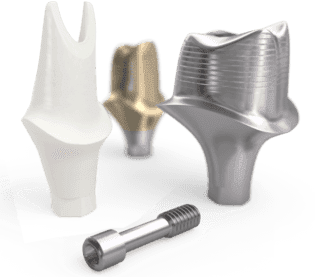 The implant abutment provides the junction between the implant and the implant prosthesis. It includes several parts, for example for a “bone level” implant with an internal connector:
A connector part which is inserted into the implant, via a Morse taper and a screw, which will ensure the tensioning of the Morse taper and the assembly, to which can be added a aliasing (anti-rotational device), most often hexagonal or octagonal.
A transgingival part which allows the prosthetic limit to be placed vertically at the level gingival and which, for certain types of abutments, forms the supra-implant gingival tissues. A coronary part which will ensure the prosthetic fixation by cementation or by screwing.

2-6-1 The different types of abutments

Classically, there are two main categories of abutments:
➢ Abutments for sealed prosthesis:
The principle of the sealed implant prosthesis is to connect a prosthetic abutment to the implant whose shape meets the general principles of corono-peripheral preparations on teeth natural, and to seal a prosthetic element (crown or bridge) on it. Once the abutments prosthetic connected to the implant, it looks like a dental abutment. The practitioner therefore works with a more “usual” technique, closer to that on natural teeth. The abutments must therefore meet the usual criteria for corono-peripheral preparations (PCP): retention, stabilization and support There are different types of abutments for cemented prosthesis:
Standard non-modifiable abutments (cylindrical): They are generally made of titanium and have
by construction, a transgingival and coronary height as well as a morphology They cannot be edited because they are inserted and twisted at the start of the phase prosthetic. They remain in place until the assembly of the used prosthetic tooth, preferably overcome during the inter-session with a protective cap or a temporary sealed.
Modifiable standard abutments: They have a standard morphology and can be modified by subtraction in the laboratory for the supracervical coronal part, but are not modifiable at the transgingival level. They are therefore less aesthetic because they do not allow not always optimal peri-implant tissue support and emergence profile. They are indicated for single or partial sealed dentures in areas non-aesthetic posterior. They can be straight or angled to catch up with an axis implant not functional.
Customised anatomical abutments: They come from C.F.A.O. (Design and Computer Aided Manufacturing) and are machined specifically for each patient in the coronary part but also transgingival.
➢ Abutments for screw-retained prosthesis:
The principle of the screw-retained prosthesis is to trans-screw a crown or a bridge, either directly on the implant, either through a straight or angled abutment.
Prosthetic part for “direct implant”: to speak of abutment is a misnomer because the prosthesis and abutment become one. So there is no real pillar but a prosthetic part of connection to the implant which can be burnt out (it will then be cast after adding the infrastructure of the fairing itself) or in gold (it will then be overflow).
Conical abutment: this is a “mini” abutment, which serves as a support for a screw-retained prosthesis.
Since the connection between the prosthesis and the abutment is due to the screw, there is no requirement morphological retention by friction and oppositions of walls. The pillar is therefore short (thus reducing the necessary height) and conical (thus facilitating prosthetic insertion even on very divergent implants)

More from this Author

We use cookies on our website to give you the most relevant experience by remembering your preferences and repeat visits. By clicking “Accept”, you consent to the use of ALL the cookies.
Cookie settingsACCEPT
Manage consent

This website uses cookies to improve your experience while you navigate through the website. Out of these, the cookies that are categorized as necessary are stored on your browser as they are essential for the working of basic functionalities of the website. We also use third-party cookies that help us analyze and understand how you use this website. These cookies will be stored in your browser only with your consent. You also have the option to opt-out of these cookies. But opting out of some of these cookies may affect your browsing experience.
Necessary Always Enabled

Performance cookies are used to understand and analyze the key performance indexes of the website which helps in delivering a better user experience for the visitors.

Analytical cookies are used to understand how visitors interact with the website. These cookies help provide information on metrics the number of visitors, bounce rate, traffic source, etc.

Advertisement cookies are used to provide visitors with relevant ads and marketing campaigns. These cookies track visitors across websites and collect information to provide customized ads.

Other uncategorized cookies are those that are being analyzed and have not been classified into a category as yet.